A Day Late, but "It Follows." Plus Creepsville & Agents of Peril (Required Reading!)

A day late this week. Family is the #1 priority around here, and we had a lot going with them. A day late, I'm back....

Have you seen It Follows? 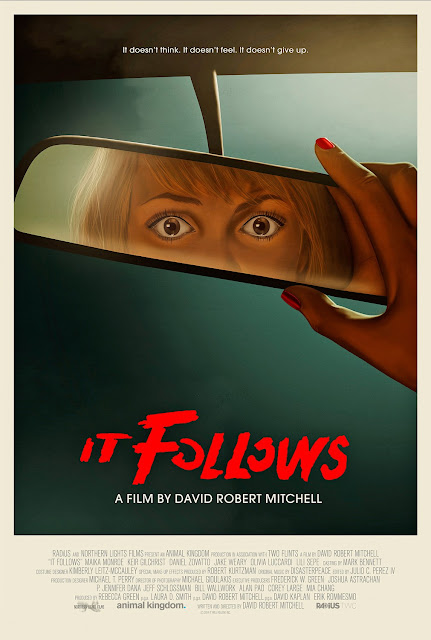 In a nutshell, it tells the story of a young woman who is given a curse, of sorts, by a young man... The curse is given to her as a result of making love to the crummy guy who knows that she is doomed by their actions. The guy informs her that there is a creature that has been following him, that can look like anyone. This thing will kill her unless she passes it on to someone else whom she has made love to. The girl soon encounters what looks like the corpse of an old woman walking right towards her that no one else can see.

The film's story goes through a number of attacks but never really gives solid info on where this creature comes from or why it does what it does. It does seem ironic that horror films do often provide the means of escape and the way to destroy the evil. These days after the creation of Night of the Living Dead, we are given a more negative world where it's just a matter of time before you get to endsville.


So, what is it about, beyond the interesting opening. Is it about unprotected sex? Is it about the long term step-by-step death of humanity? We see vey little of the adults in the families of the film's main young characters. Is it about the falling apart or even loss of the family unit? Is it just the end of the world? I leave it up to you to decide.

Almost as soon as this flick starts, we see touches that are reminscent of familiar horror film stylings, particularly John Carpenter and George Romero as well as Italian horror with the band Goblin handling the electronic music. I can't help but feel some slight nostalgia for the 80s horror boom.

I found the film creepy at first, but felt that it got lost. There's a scene involving a nerdy male friend of the lead, who thinks he can stop the creature. How does he know? Beats me. I must have missed that scene. (Please, someone clue me in.)

As I continued through the film, something else about the the movie's style took my attention away. First, it occured to me that I was spooked by the movie because I knew it was a horror film. The film also felt like one of those low budget romantic comedies with a young ensemble cast moping around the screen. My distraction continued as I thought about what might happen if the music in It Follows were lighter in tone. With only a slight change in the film's music, we would be in a totally different place than this flick's depressing world. It could be Boyhood.

Summer is finally here... which doesn't stop the Creepsville comic from marching on. Click on the artwork below and read this week's offering.

Meanwhile, Agents of Peril is also back, continuing my plan to rescan and post two installments of the strip at a time until I catch up to the new strips... and finally finish this years-in-the-making story... a tribute to Rollercoaster starring George Segal.

Okay, I lied about the Rollercoaster homage... 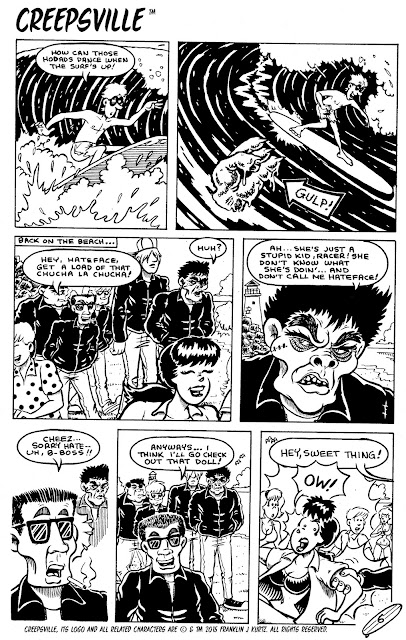 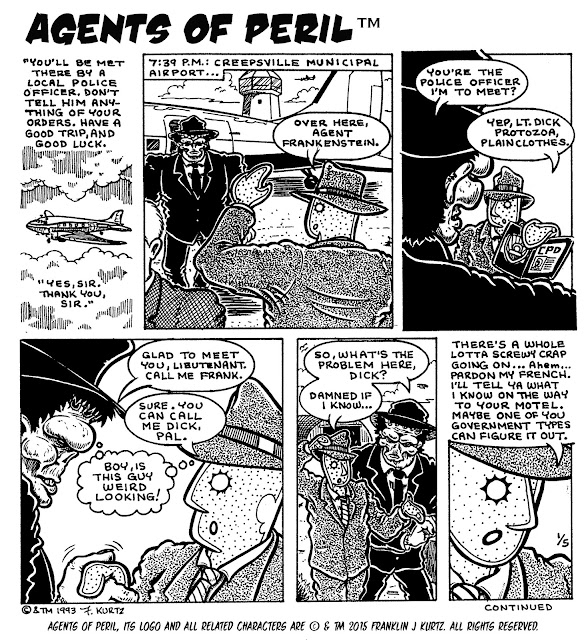 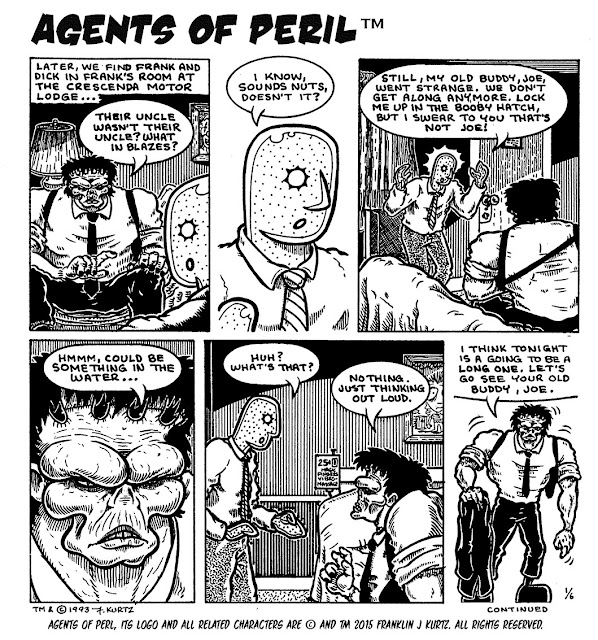 Posted by Frank Kurtz at 4:51 AM No comments:

Settling Down and Accepting Change - Creepsville & Agents of Peril In Place -- F-A-B!

I have to admit that I was out of sorts all this last week. Last week was the switchover from Monster Patrol to Agents of Peril. Meanwhile, at my job (whatever it is I really do), they're literally moving everyone in the building's 7 stories. I'm staying on the secret agent level but they're moving me east two aisles. Go figure.

[Hold on... Why is it that the building exterior looks like the Lament Configuration from Hellraiser? I hope they aren't seriously considering mixing high-tech spy junk with Cenobites. Nah!]

I really don't mind change as long as it is pleasant. Change is good. Without change, stagnation comes. If you follow that long enough, you get the end of the universe.

Well before that, there is the inevitable passage of time in which the kids grow up and move away. It's nice and quiet here with them mostly gone, but sometimes you miss the chaos, seeing change before your eyes. Now, two of them may be going soon... going west to school. I'm proud of them and will miss them... but, wait, it gives me an idea. Now, Colette and I have legit excuses to go to the left coast. Sounds good to me!

While we contemplate our travel schedule, why don't you read this week's Creepsville and Agents of Peril? You'll be glad you did. 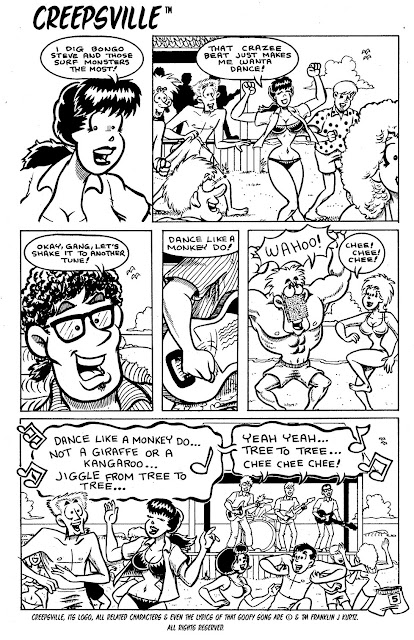 Posted by Frank Kurtz at 4:09 AM No comments:

Agents of Peril Is Back -- and Things Are Gonna Get Very Ugly This Time! 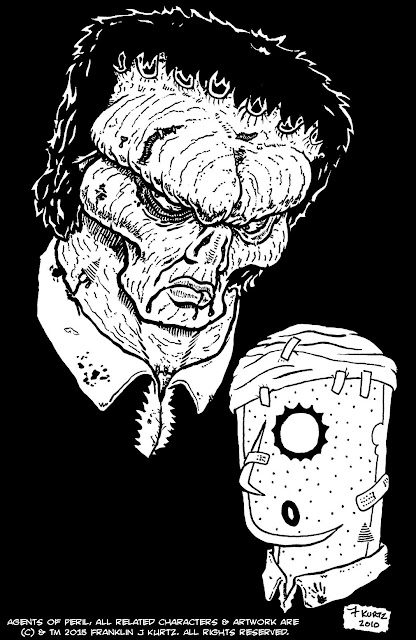 It's about time I got this done...

By that I mean the everlasting Agents of Peril story that I have been working on for years. Work on the strip started way back after the plug was pulled on Creepsville. I've worked on it in bits and pieces ever since but never finished it, unil now. Now, it's going to finally get done.

You will have to wait until we catch up to the new stuff while I reprint or rescan the artwork for all the previously posted pages. A lot of you may have not seen the older stuff, which I must admit that I really like a lot.

Also, as promised, I will post the pages 2 at a time, until I get to the unpublished stuff... which will be one a week.

To kick it off and promote the new stuff that is coming, here's a piece of promo art I did awhile back for their return. It says 2010, but I thought I did this much more recently. 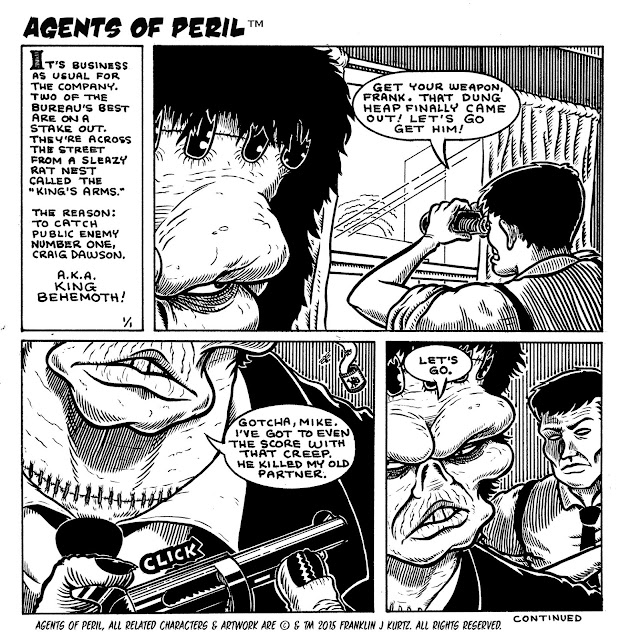 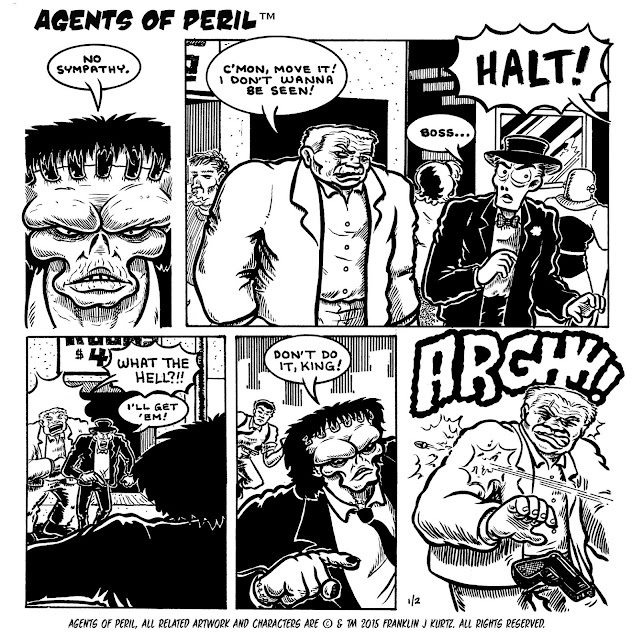 I also took a quick break on Creepsville this week, and thought I would show you a promo piece that Chris Ecker and Gary C allowed to appear in the first full-color issue of Big Bang Comics from Image. It was fun seeing my Creepsville characters in color for the first time printed in that classic old Sparta color style. If I was rich, I'd do Creepsville in that style all the time. 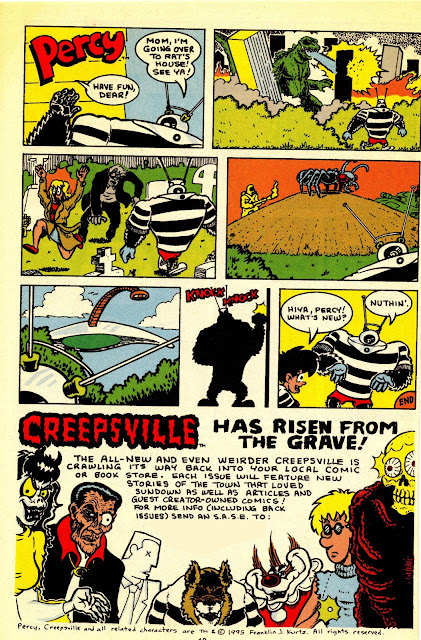 Well, I must go. There's something in the sky that's all bright. I think the rain has stopped for maybe another 10 minutes and I thought I would get some pictures of it before it's gone again. Until next time, have a great... and hopefully, dry week.
Posted by Frank Kurtz at 5:12 AM No comments:

Endings, Beginnings, and Who's That Hot Chick in the Bikini?

Yes, I do actually get up as early as the time say I'm putting these things up. I know there's a way to do this procedure with the various gadgets and geegaws provided by Blogspot allowing me to write this stuff and post these graphics to be uploaded at a set time. There's just one problem: I'm doing other things in the daytime... like scanning loads of magazine covers for eBay auctions. I scanned over 50 of them yesterday. I promised Colette that I would sell some of the stuff that seems to be in every nook and cranny of our home.


I also did some work on an idea that I have had for this Blog for sometime. All I'm willing to tell you about it is that it will be called Creepsville City Limits. In a world filled with creative types, it probably won't set the world on fire, but I'll have fun doing it.

While that project slowly moves towards starting, the first issue of Monster Patrol I've been posting here officially comes to a close. As I've mentioned a few zillion times, the Agents of Peril strip will return with more new scans of the earlier pages... and all-new never seen before pages I did while I had placed this project in suspended animation.

Even though the search goes on for Creepsville artwork on my computer and various disks after my external extra hard drive nosedived into oblivion, I still have the artwork in black and white, including some pieces that I did just for the fun of it. One such piece shown below features 50s-60s monster maker Paul Blaisdell's She Creature showing off her girlie stuff to a trio of familiar scaley and slimey judges for the Creepsville Bikini Contest.  I really enjoyed drawing this cutie, which was published in the final issue of Amazing Heroes' Swimsuit Specials.

That's it for me this week. The sun is just starting to make its presence known... which means I have a lot of other things to get done... like scanning several thousand more monster magazine covers, trying to figure out happened to that Video Watchdog book I had, and actually just reading a whole bunch of Marvel Comics pre-code horror stuff for the fun of it.

Read the comics below and have a great week. 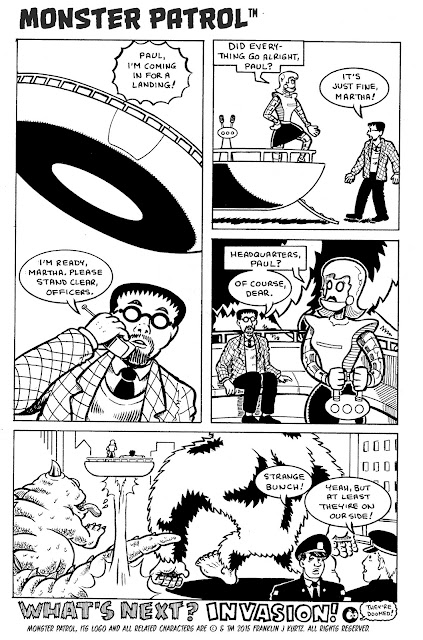 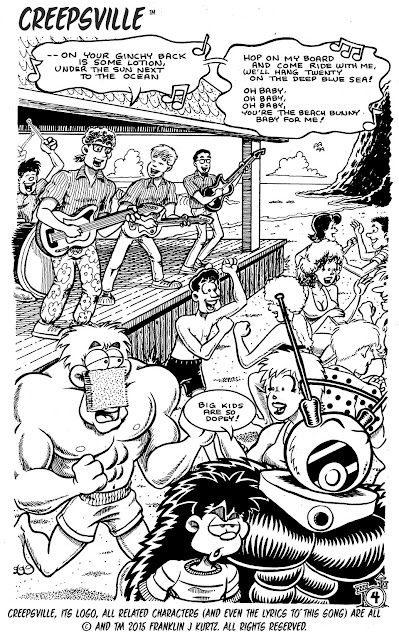 Posted by Frank Kurtz at 3:31 AM No comments: