An Explosion in This Week's Creepsville Brings Forth Super Elastic Bubble Plastic? 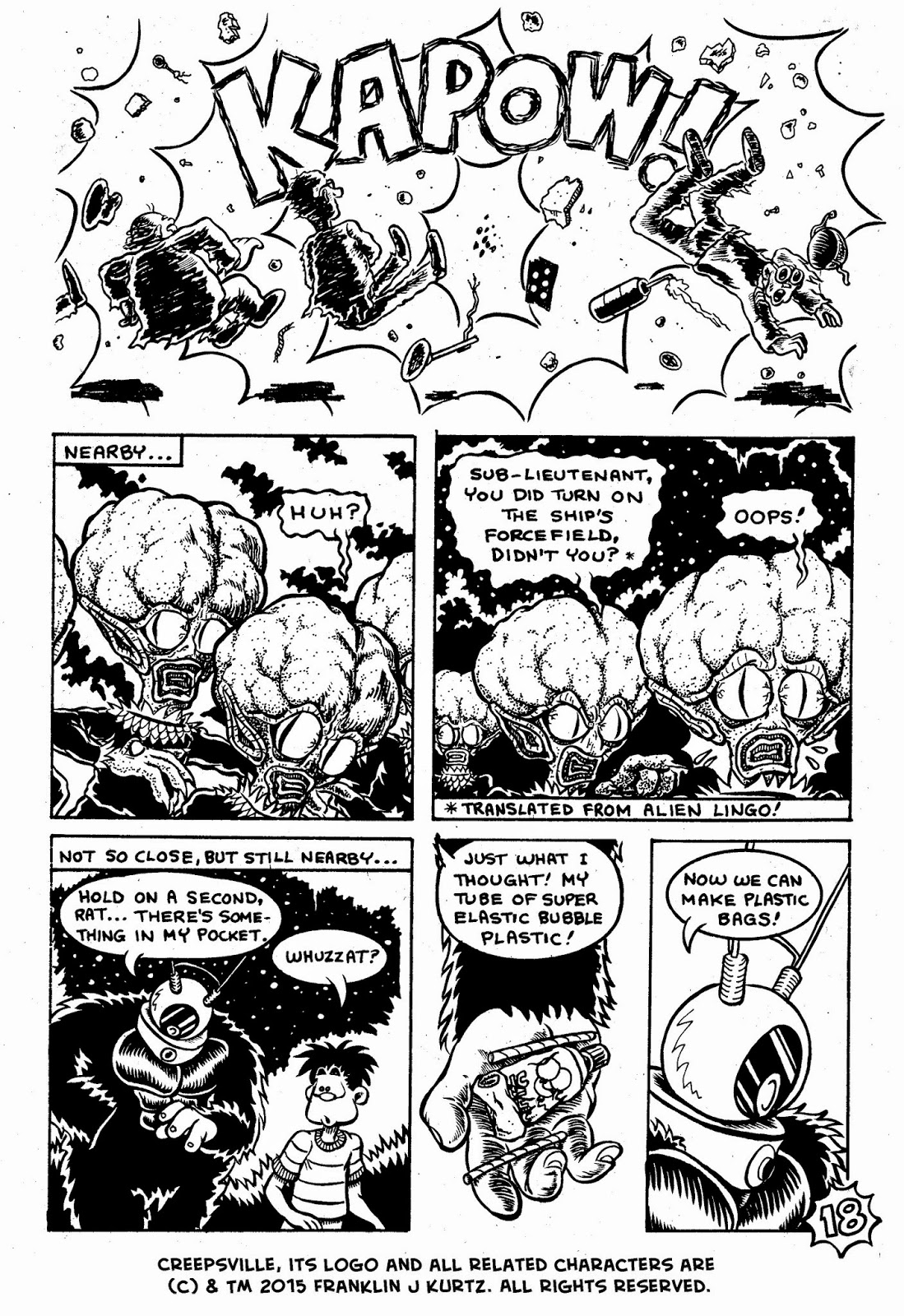 This week's Creepsville page brings up Super Elastic Bubble Plastic, a rather odd "toy" that had been created by Wham-O... and for the safety of mankind, is no longer being made.

SEBP (my abbreviation) was a blueish sticky goo that had to be squeezed out of its metal tube, enough to cover one end of a plastic straw that came with it. Once this was done to your own size desire, you blew through the other end creating a plastic bubble. You would then pull off the gooey mass from the straw and pinch it to keep the air inside. Voila! You had a colorful (rainbow effect like oil in a pool of water) plastic ball that could be broken or smashed very easily.

In the story, Rat and Percy could create a huge bag to carry Martian guts. There is no way the bubbles you created could do that.

Eventually, due to noxious fumes emanating from the goo you put the straw in followed by having your nose too close to it while inflating, Wham-O stopped making this stuff. A few other small companies tried to make it, but attempts were shortlived. The image I included here is how I remember this stuff. I hated SEBP and still remember the awful smell. 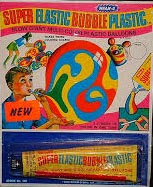 Posted by Frank Kurtz at 4:59 AM No comments: 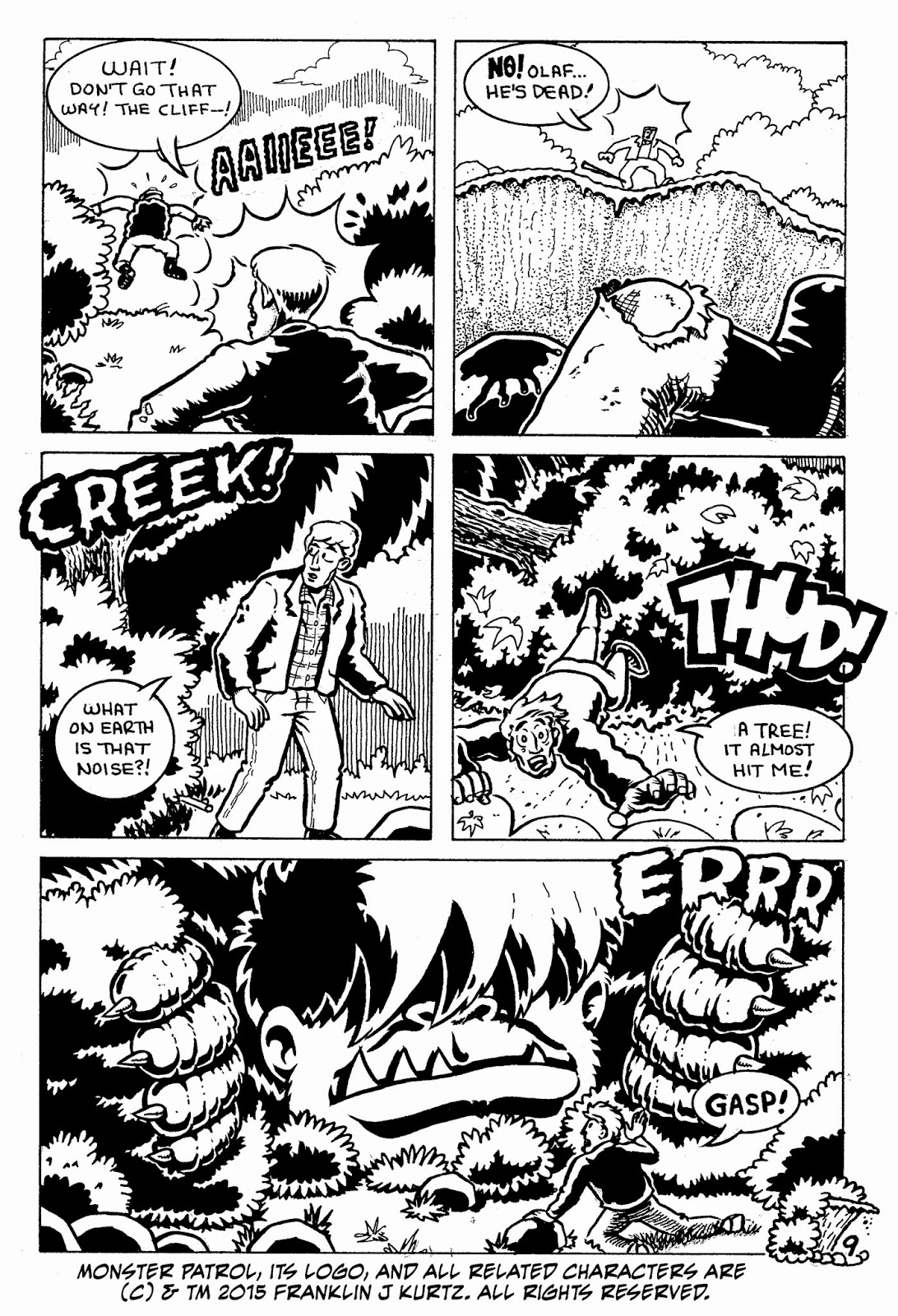 Well, actually Pink Moose was in Crispy Critters cereal... or was it orange moose? Nah... that was Quake Orange Quangaroos. I can't explan why this popped into my head...
Posted by Frank Kurtz at 6:04 PM No comments: 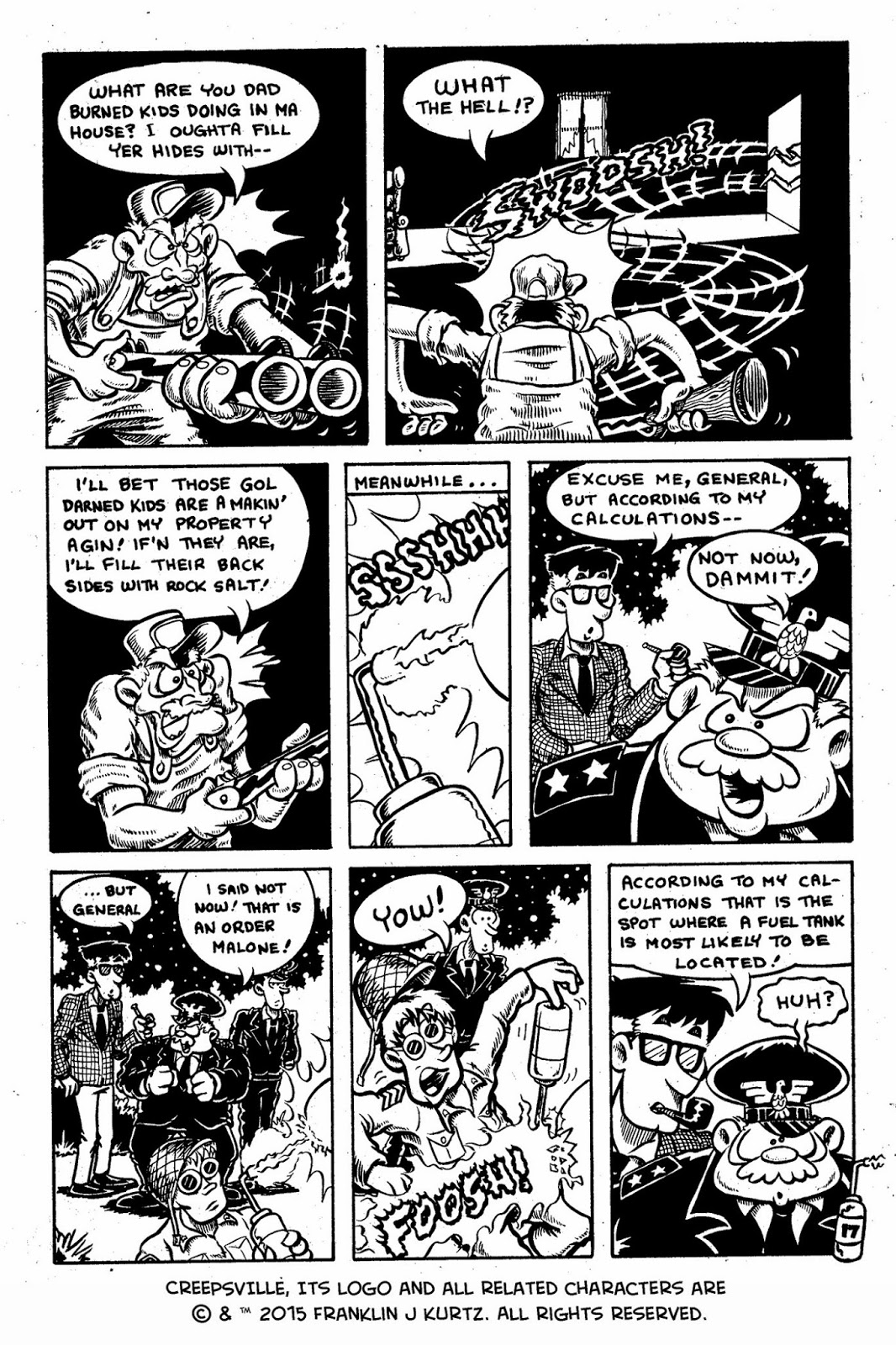 In the original film, Invasion of the Saucer-Men, that this comic parody is based upon, veteran character actor Raymond Hatton played the part of shotgun wielding Old Man Larkin.

According to the Internet Movie Database, Hatton acted in over 500 movies, going back as far as the earliest silent films. His first known film acting credit was Tragic Love (1909).

As far as sci fi genre films, Hatton was in Roger Corman's post atomic holocaust flick The Day the World Ended. He played Pete, an old prospector who brings his donkey into the film's radiation free zone after an atomic war.

Besides quite a few credits in low budget westerns, Hatton had a long career in television. He played The Mole in the Dick Tracy TV series in 1950. Other programs he worked on in a number of roles for each series included The Adventures of Superman, The Cisco Kid, Maverick and many more.

His final role was in In Cold Blood, as a hitchiker.

Hatton passed away in 1971, 5 days after his wife had passed from this mortal coil.
Posted by Frank Kurtz at 4:10 AM No comments:

Labels: Creepsville, Invasion of the Saucer-Men, Raymond Hatton, The Day the World Ended 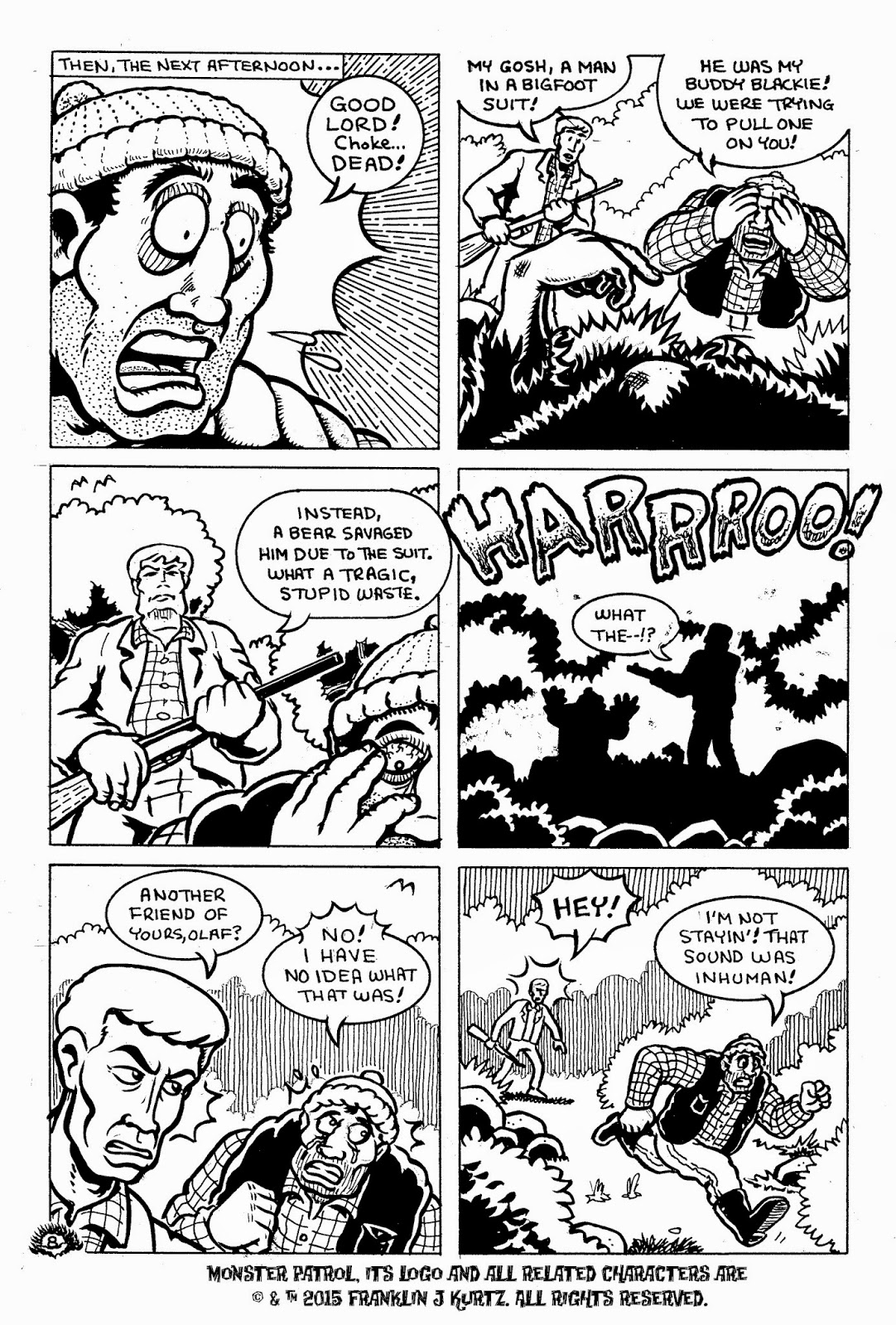 Who Was John Chambers?

John Chambers was mentioned here with the previous posting for Monster Patrol in regards to the infamous Roger Patterson Bigfoot film. As far as the make-up and monster makers in Hollywood were concerned, Chambers was the man who made the suit.

Chambers was also the man who created the ears for Mr. Spock and created the make up for the Planet of the Apes film series. Of course, he was on set managing and teaching over 70 artists to create apes quickly.

Chambers also did work for The Outer Limits, The Munsters, Lost In Space and other programs and films.

John Chambers also had a secret life that not even his compadres in Hollywood didn't know about. In the 70s, Chambers brought his skills to the CIA. One of his unique creations was a make-up kit which an African-American agent could use to look like a caucasian. One of these kits was sold recently through a Hollywood auction of props, though this was the real deal and actually used.

Chambers was also a key player in the "Argo" project, a sham movie project that was used to get 6 American embassy persons out of Iran. For this and his other work, Chambers received the CIA's Intelligence Medal of Merit.
Posted by Frank Kurtz at 6:46 PM No comments: 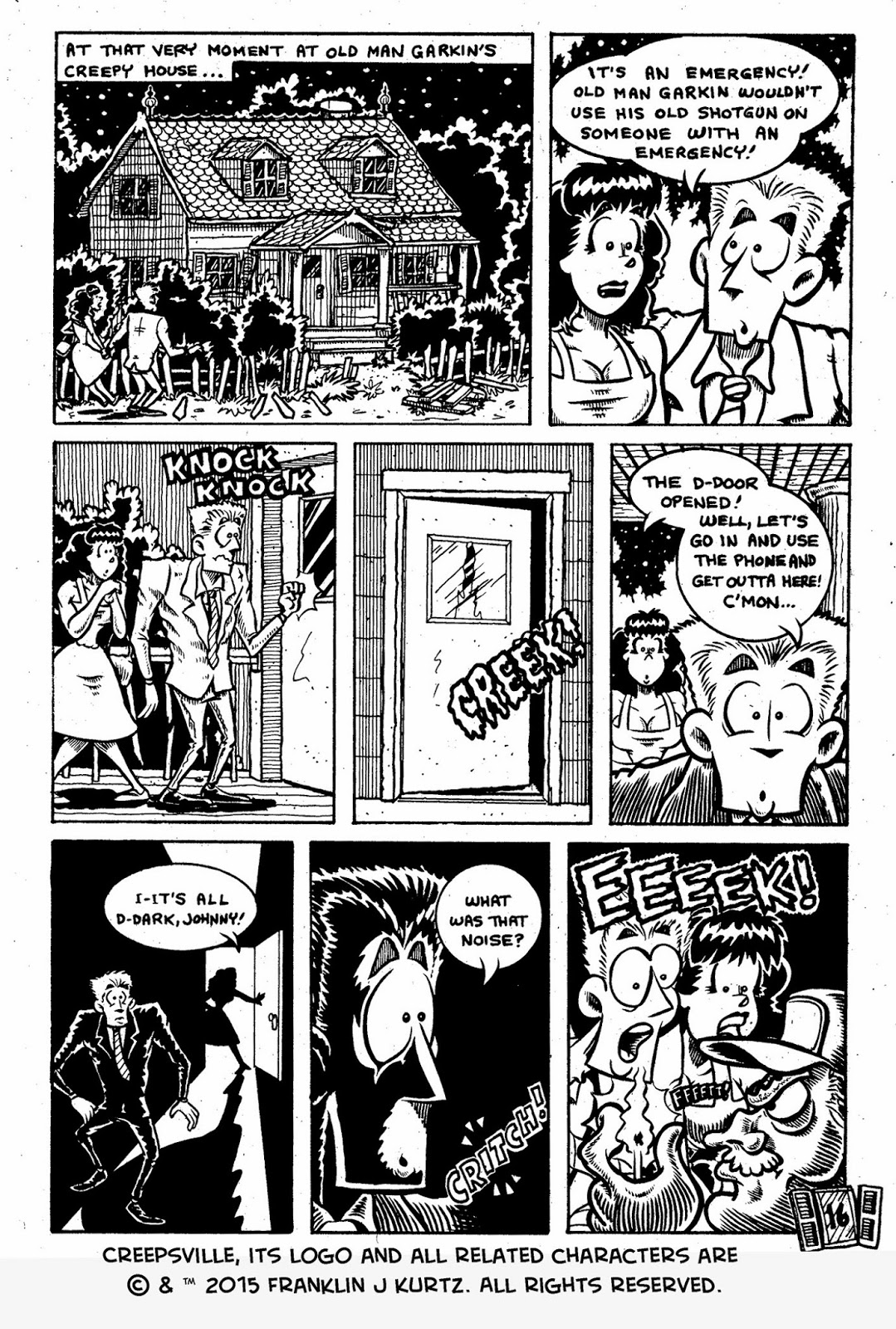 Trivial Trivia: This Creepsville page takes us to a scene directly out of the movie Invasion of the Saucer Men where the teenage leads go into a spooky old house to get help after hitting an alien with Johnny's car.

Years ago, I got the opportunity to interview Bob Burns, famous collector of many movie props, gorilla suit actor on the original Ghost Busters TV series and an assistant to his friend Paul Blaisedell on a number of classic AIP monster movies, including this one.

The thing that Bob told me her that actually surprised me was that this house facade existed on one of AIP's sound stages... AIP owned sound stages?!! Bob revealed to me that AIP had a good sized stage with a forest inside, where this house stood as well as gravel and dirt roads.

I'm pretty sure that this stage was later used in How To Make a Monster in a scene which had part of a nonexistent movie "Teenage Werewolf Meets Teenage Frankenstein" being filmed in a wooded set. Boy, I wish that movie had really been done.
Posted by Frank Kurtz at 3:26 AM No comments:

Labels: Creepsville, How to Make a Monster, Invasion of the Saucer-Men 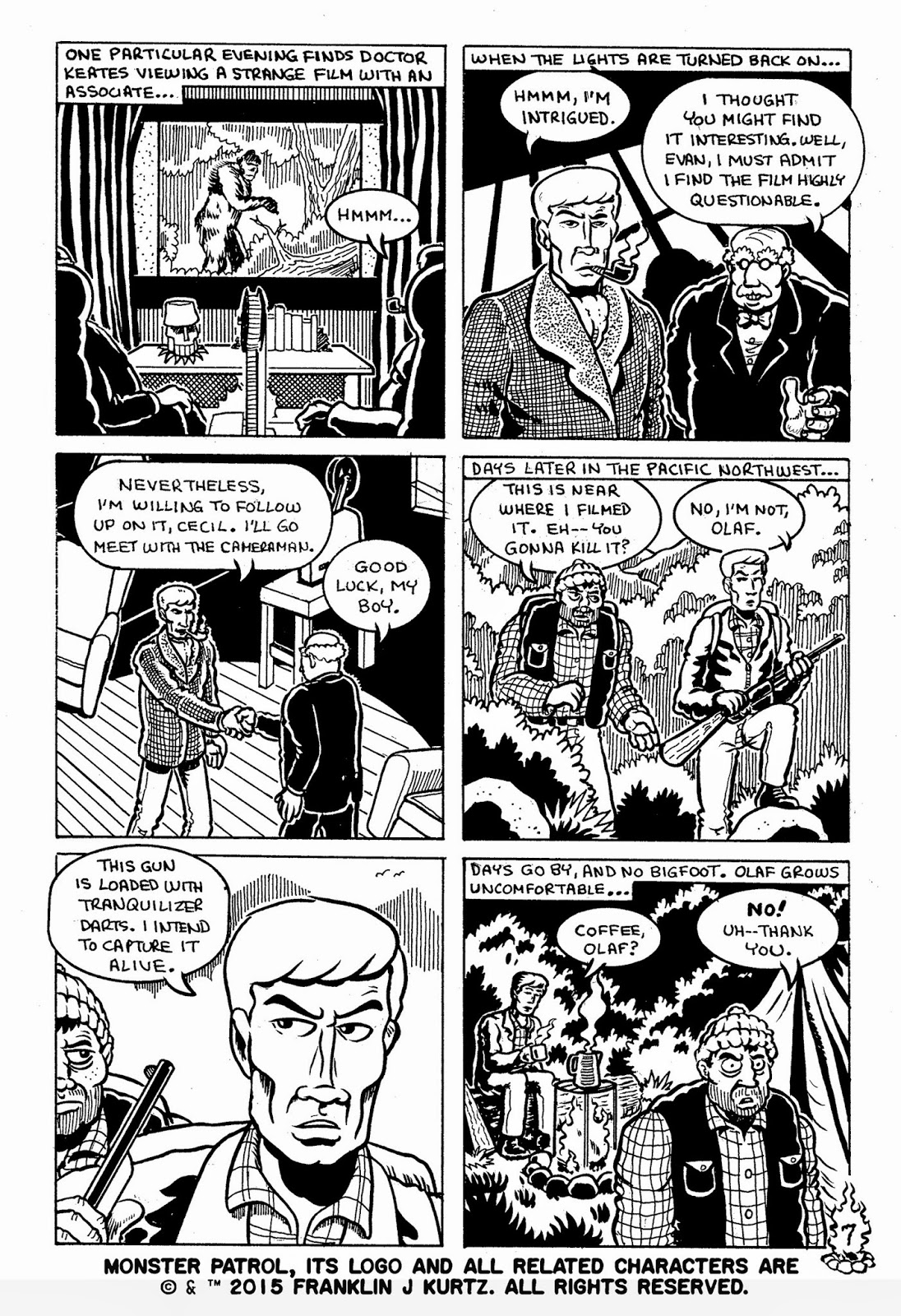 This week and going forward to cover anything else put up on the Laughing Reindeer, I decided to initiate a couple of small changes in the page design or details on what inspired the page at hand.

First of all, perhaps most obviously, the story in this portion of the origins specifically mentions "Bigfoot, " so you can probably guess what you might be seeing ahead, though you would probably be wrong.

Perhaps you've seen the ultimate Bigfoot film that served to set off a craze in early 70s America for these mythic creatures. That film was The Legend of Boggy Creek, which told the "real life" story of a Bigfoot type creature dwelling in swamps around a small town in Arkansas. Creator Charles Pierce did a great job with very little money filming the strange story like a documentary, including some of the actual witnesses in the film. The movie made loads of money.

I can tell you exactly what my reaction to the movie was. It scared the hell out of me. When I got home that night, I closed every window in the house. We lived in a house out in the country with woods behind it. No way was I going to let Bigfoot reach in through an open window. My little sister
and brother were confused and amused.

The success of Boggy Creek inspired a whole bunch of other Bigfoot films. Two of my favorites from this era were Mysterious Monsters, a Sun Classic "documentary" hosted and narrated by Peter Graves and the fictional Creature From Black Lake which is not only creepy, but had a pretty good cast of actors to make it feel real.

It should be noted here that there was one other piece of film that inspired Boggy Creek. Mysterious Monsters included it in its mostly Bigfoot menu. This was the controversial film shot by Roger Patterson who claimed he had come upon a real Bigfoot. The first panel here has my own homage to the
Patterson film. Over the years, it has remained a subject of much debate, with some naturalists believing that no human being could walk that way while others, particularly Hollywood make-up and monster men, claim it was a suit built by legendary monster maker John Chambers. I'll have more to say about Chambers next week.

Until then, stay out of the woods at night... or bring your squirrel gun.
Posted by Frank Kurtz at 4:56 PM No comments:

I've been in a very creative frame of mind lately.

Maybe it's the weather. When it gets as snowy as it did last week, I usually stay inside, unless there's shoveling that needs to be done. In a case like this, if Colette can't catch me, I'm writing on the 'puter and/or drawing some comics

Maybe it's also the great HERO Illustrated get together we had a couple of weeks ago. We may all have a few more gray hairs or lots less hair, and some of us have kids... but we were like the crazed bunch that we were when we were young enough to be able to stay up all night writing about comic books. We talked about all sorts of things. We remembered that we all actually still liked each other a lot. We will also be seeing each other again.

And there's Creepsville... I've been doing some coloring on those old pages drawn a long time ago. It's been a lot of fun but is also time consuming. These days, the comics biz rightfully embraced the computer for its easy use in coloring comics. I've done some coloring over the years, but I have to admit that I'm not as fast as the artists working these days who do it all time. Still, the more I do, the faster I get. I also think that the time taken will result in better final results.

I've also been exploring the printing side of this project. It seems like there are some very good possibilities in getting a high qaulity product and not selling your soul or first born child to pay for it. There's still a lot to be done, but there's also a good chance that some of the color work will pop up here from time to time.

Another good thing that's come of this project is a renewed enthusiasm for Creepsville. I thought I had already run out of ideas for the series but such was not the case. All kinds of stories have been battling it out in my brain leaving me even more excited. I'll also add that this has been the case with a few of my other creations, including Agents of Peril (it will definitely be back) and Monster Patrol, as well as a few more that you've never seen.

Let's leave it at that, with a promise to show-and-tell and tell ASAP. As usual, here's this week's Creepsville page. Click on it to see the larger legible version. Meanwhile, I've got to get back to work. Aloha. 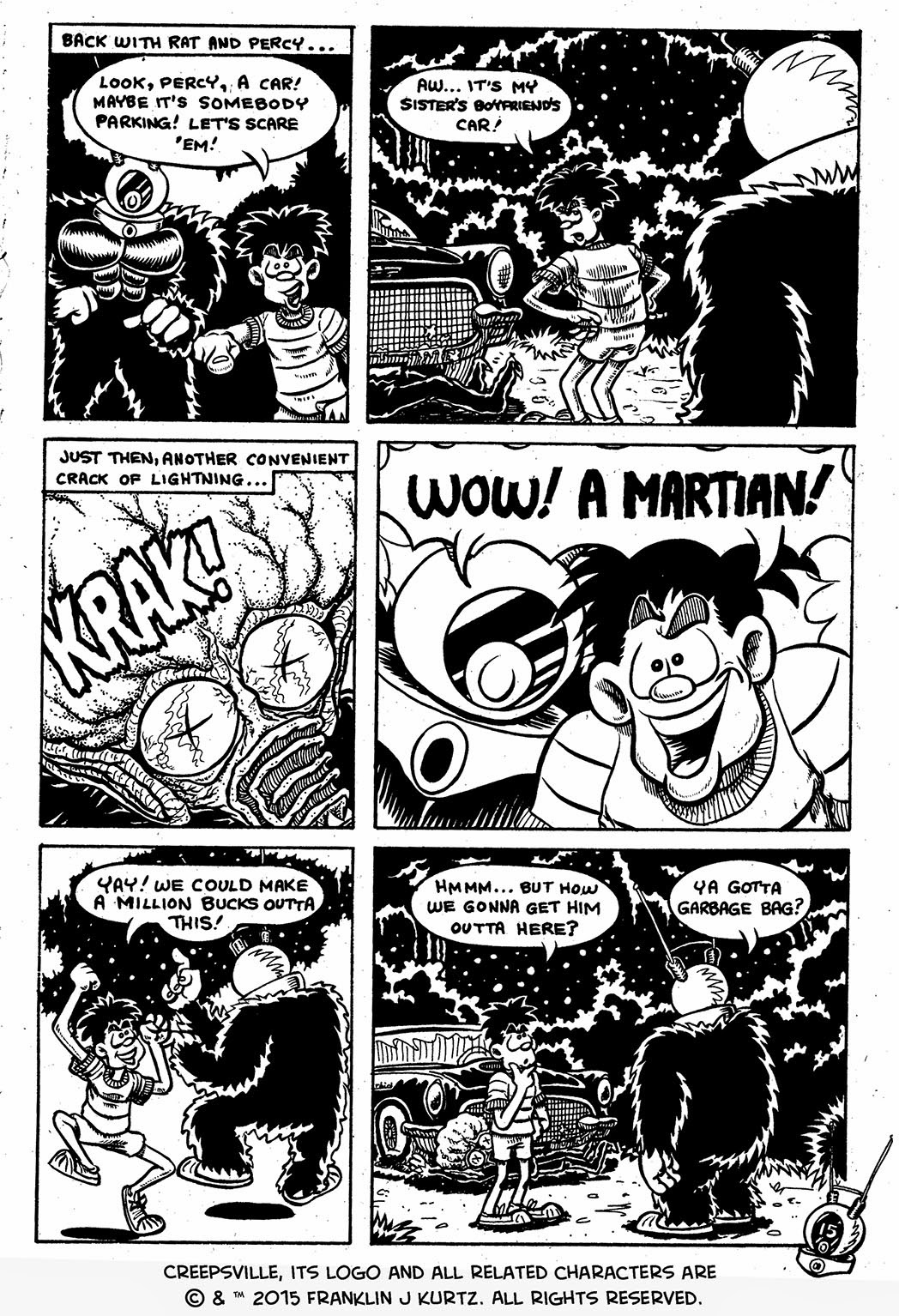 Posted by Frank Kurtz at 3:36 AM No comments:

I'll make this quick... for this time at least, I am not late with the Wednesday posting.

Second, this posting begins the Top Secret Origins of the members of the Monster Patrol. Click on the graphic below to read the first slam bang action-filled page. 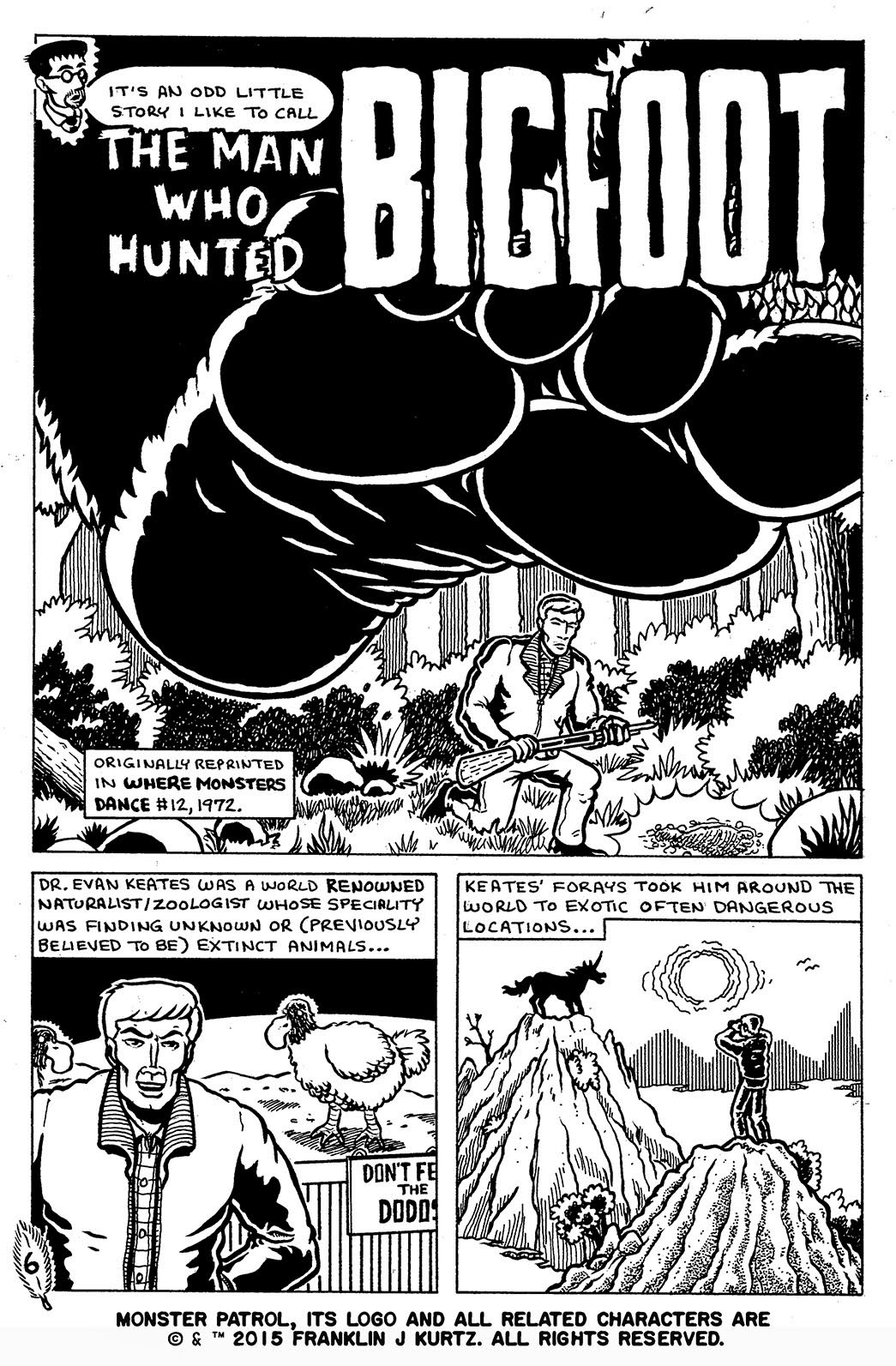 Posted by Frank Kurtz at 5:08 PM No comments: